It’s always good to have an opportunity to get out and find out about all the great work that is happening in cities and beyond.

A visit to traffex 2017 was a good occasion to catch up with some of our policy partners from the West Midlands Combined Authority and Transport for West Midlands, and meet the people and groups at local level doing applied work on transport modelling and data access and management – in this case in a bid to address the West Midlands Network Resilience Challenge facing the area over 10 years with transformations in local, intra-regional and inter-regional transport and infrastructure (HS2 just being one of them).

Following on from a #brumdatahack last autumn where TfWM, Birmingham City Council and other partners opened up datasets for transport professionals and data analysts in the city, DEFT153, led by Teresa Jolly, is looking to take its work further in providing a place for bringing together existing work in the area with the aim of building a larger community of practice. While data-literate transport professionals with knowledge of modelling and coding exist in the private sector, very often, says one participant, they are consigned to management rather than understanding the analysis, and IT systems and professional practice actively disincentivise or prevent them from getting more acquainted with this unless its in their own time on personal devices.

Some very interesting work is being done in pockets across Birmingham’s three universities, namely at Birmingham City University and Aston University, together with Innovation Engine through Innovation Birmingham, and in collaboration with Transport for West Midlands and the Combined Authority.

The Cognitive Digital System Engineering Centre at BCU has developed two pilot versions of the DISC toolkit for a private sector, and an education audience. Running a transportation model with a 3D building model alongside different sets of open and proprietary data on health, pollution, and some social and economic parameters, employing machine learning algorithms for projection, this platform aims to support urban planners to simplify complex decision-making. The ‘academic’ version is currently being used alongside a specifically developed lesson plan at a Further Education College in Solihull to open up the practice and concepts underlying decision-making in cities – to aid the process, a lego-model of the Curzon area in Birmingham, is linked up with the interface to allow kids to interact with the model – take away or add a lego component, move a building, the floor size and other parameters will change on screen. 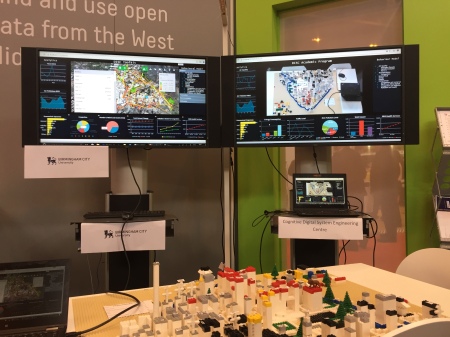 Another team from the Digital Media Technology Lab at Birmingham City University are in the process of setting up an open street map powered data analysis tool titled ‘Birmingham in Real Time’, using real time sensor data from across the city to help councils and private companies do real-time analysis.

How might these be useful to the wider West Midlands? It’s a first coordinated and bottom-up step in bringing together expertise across local universities, the private sector and councils towards a more coherent strategy in using data for planning, so far with a distinct focus on transport. The West Midlands Combined Authority is a complex geography, with impending large-scale transformations (see also Midlands Connect transport strategy), and some political restructuring of transport policymaking and delivery through the devolution process. While Government is looking to give powers over transport to an incoming Mayor, local authorities would prefer retaining control over their respective portfolios, with concerns that a mayor would centralise decision-making too much too ‘make sense’ for the West Midlands Combined Authority – introducing the tools and data, as well as building a community of practice across different sectors across the wider city region, would help build a baseline of more distributed evidence-based decision-making.

More detailed information about plans for a data discovery centre, the work taking place at Transport for West Midlands, Innovation Birmingham, Aston University and Birmingham City University can be found on the DEFT153 website, and their Creative Director, Teresa Jolley’s latest contribution to the Department for Transport’s Digital blog.

Worth noting is also Digital Birmingham’s work on the European Regional Development Fund’s ‘Big Data Corridor’, looking at the more connected, inclusive development of the cities’ Eastern Corridor as an area with high deprivation through the use of Internet of Things technologies and big data.